A new tax check-off for the Ohio Historical Society has been added to our Ohio 1040 and 1040EZ tax forms. This year you can dedicate part or all of your state income tax refund to history-related projects in communities across Ohio. The society will use revenues to create a grants program to support history related projects statewide.

Happy New Year!  The results of the 2010 Census are rolling in!   Although the "big picture" numbers were released last year, the detailed local numbers are still coming out.  The St. Anne's Hill Historic District is almost entirely represented by one Census Tract Block Group - Dayton Tract 19, Block Group 2.
Unfortunately, the east side of McClure Street is left out and a few homes from the Huffman Historic District on Terry Street are included instead.   However, some people have suggested that the southern block of Terry Street should've been part of St. Anne's Hill anyway, so maybe it all balances out in the end.
So the numbers are not a completely accurate representation of our neighborhood, but it is pretty close.   Here's what we found so far.... 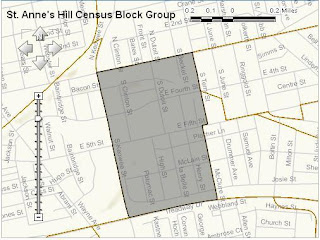 * Note: Family is defined by the Census Bureau as two or more people related by birth, marriage, or adoption - but does not include same-sex couples.

The numbers for things like employment, education, and income have not been released yet.   We will try to post those numbers when they are available, but it should go without saying that St. Anne's Hill continues to be an attractive, diverse, and inclusive community.    We welcome everyone to our neighborhood!