On Saturday, neighbors and friends gathered on Fifth Street to dedicate a new work of public art.   The sculpture was created by Hamilton "Ham" Dixon in partnership with teens from the K12 Gallery For Young People.    The new artwork will help enhance Fifth Street, and also draw attention to the renovations at the former American Saloon.   For more photos of the event, just click here! 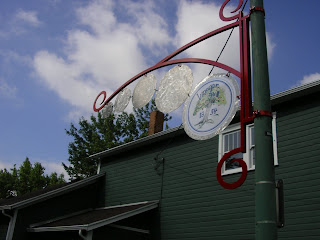 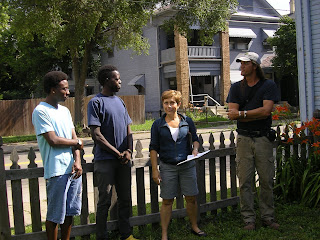 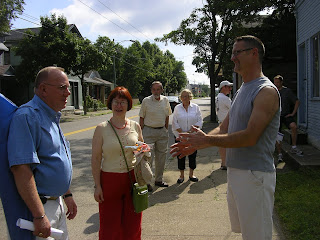 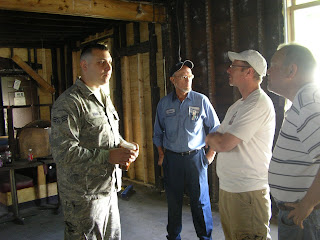 Checking out the renovation work at the old Saloon.

A fun little track meet to test your foot speed at the start of the summer.  Participants can run the 1-mile (1600 meter) individual race , the 2-mile (3200 meter) individual race, and/or the 4-person team relay race (4x800 meter).  Relay teams are selected at random, so there is no need to form a team before the race.   You may end up on a team with the 3 fastest runners...or the 3 slowest....its the luck of the draw, and that's what makes it so much fun!
WHEN: Wednesday, June 15.  The race starts at 7:00pm.
PARKING: Stivers School for the Arts High School, 1313 East 5th Street, Dayton, OH 45402-2222
REGISTRATION: Race Day Registration Only. We recommend you arrive at least one hour before the race to park, register and warm-up prior to the race start.
FEES:

AWARDS:
Top 5 Male and Female in the 1600M and 3200M events.  Top 5 Co-Ed teams in the 4x800M Relay.  All finishers in the 400M and 800M kids events (non-competitive, all finishers are winners).
VOLUNTEERS:
Meet some new friends and have a great time while making a valuable contribution to the local running community by volunteering at this event.

Come have some fun and join the run!
-
Posted by Keith at 5:02 PM No comments:

Please enjoy these amazing photos of the annual Trash N' Treasure neighborhood yard sale, taken by our resident photographer, Nicole.   Here are just a few of them.... see you next year! 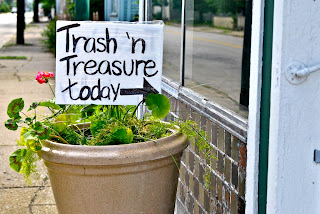 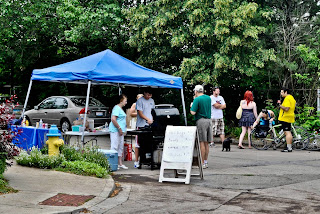 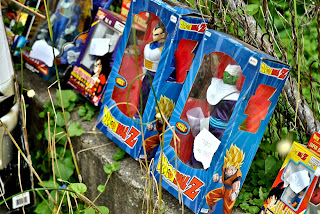 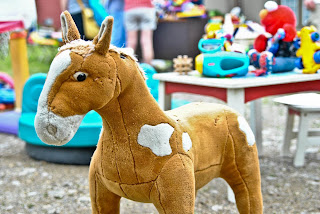 St. Anne's Hill's own Gerald Strickland will be featured in this year's CityFolk festival in Downtown Dayton on July 1-3. 2011.    The annual festival is one of the region's most popular events.   According to CityFolk's website:

In April 2009, Strickland moved to Dayton and opened his own shop on East Fifth Street. Skilled at building, repairing and restoring all types of fretted instruments, he specializes in repairing broken head stocks, neck resets, bridge re-glues, cosmetic repairs and full restorations and has an outstanding national reputation for the quality of his repair work.

Strickland has been designated a Fender “Gold Level” repair technician for both acoustic and electric guitars and is certified by several other major guitar manufacturers to do warranty work on their instruments.

Gerald is a great guy and a great example of the craftsman that have always found their way to St. Anne's Hill.   He follows the tradition of the early German settlers who built the neighborhood, and found a new home for his musical craftsmanship in our little corner of Dayton.

Please make sure you stop by CityFolk and say hello to Gerald.   Tell them St. Anne's Hill sent you!

PS.  The former director of CityFolk happened to live in St. Anne's Hill until moving to Kentucky for another position.  St. Anne's Hill is the arts community of choice in Dayton!

Join us for the annual "Trash N' Treasure" neighborhood yard sale in St. Anne's Hill this Saturday!    Just click here to get the official map of all the great sales and entertainment for the day.

While you're here, stop by some of our great local businesses like the New York Pizzeria and the Missing Peace Art Gallery.     There are homes for sale or rent as well.

We are expecting literally hundreds of visitors, so "TNT" is always a great day to visit St. Anne's! 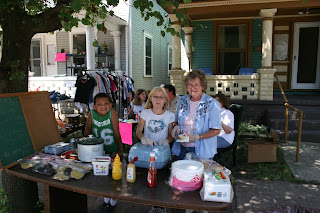 At our monthly meetings in St. Anne's Hill, we try to follow a loose version of Robert's Rules.   These rules help groups to stay on track and discuss issues in a reasonable way.   Here's a little background on Mr. Robert....


Henry Martyn Robert was an engineering officer in the regular Army. Without warning he was asked to preside over a public meeting being held in a church in his community and realized that he did not know how. He tried anyway and his embarrassment was supreme. To bring order out of chaos he decided to write Robert's Rules of Order as it came to be called.

He believed these basic rules, which still hold true today....


Abide by the will of the majority
Listen to the minority.
Consider one thing at a time.
Give everyone a chance to talk.

However, most people don't realize there is a Dayton connection to Mr. Roberts...


Born in Robertville, S.C., Henry M. Robert and James Robert were sons of the Rev. Joseph T. Robert, a Baptist minister.  Mr. Robert did not approve of slavery and before the Civil War became inevitable he had moved his family to Dayton where he accepted a college teaching post.

James Robert followed in his father’s footsteps, becoming a tutor at the elegant girls’ school, Vassar.   Henry M. Robert entered West Point at the age of 16, destined to become a general in the U. S. Army Corps of Engineers.

James Robert returned to Dayton at the request of local educators and wealthy parents, to head the Cooper Female Seminary, which was located on W. First St., on the present site of Westminster Presbyterian Church and the Board of Education building.

A plan by E. R. Stillwell to broaden the levee from Monument Ave. to First St. interested him, but he believed that more valuable real estate would be created by dredging the river basin and filling the land to the pasture that then served as a gypsy camp ground.  The plan for his development had the plat extending from First St. to Fourth St. and from the Third St. bridge to the Dayton View bridge.

Robert sought technical advice from his brother, Henry, then a colonel in the engineers, who agreed to help.  The two brothers became so taken with the project that Henry was to make frequent trips to Dayton as the various phases were completed.

On one such trip, he met the accomplished Helen Thresher, daughter of early settler Ebenezer Thresher, owner of the Thresher Paint Co.  The young couple’s romance culminated in a Christmas Eve wedding in 1860.  Thus, Henry M. Robert married into a Dayton family and Dayton history.

Thanks to DaytonHistoryBooks.com, we now know that it is quite possible the famous Mr. Roberts spent some time here in St. Anne's Hill.    Please join us for our next monthly meeting on Tuesday, June 7, 2011 at 7 pm in the Liederkranz building, and see his rules in action.