-
People often wonder how the name "St. Anne's Hill" came to represent a neighborhood. Sadly, that tale is lost in history. The first known use of the name was found in 1830's advertisements. 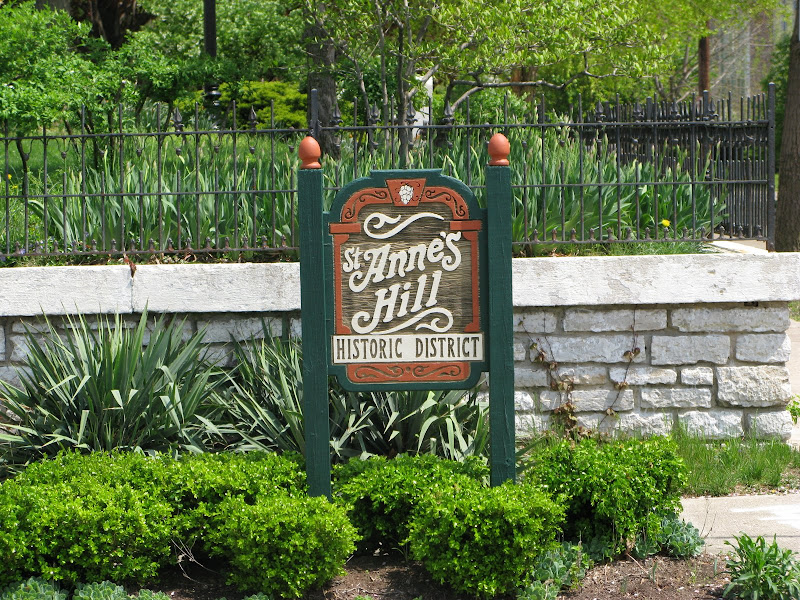 However, we can still ask the question: who was St. Anne? According to Catholic tradition (with a little help from Wikipedia), St. Anne was the mother of the Virgin Mary, who gave birth to baby Jesus.

She was known as Hannah by the Greeks, which means grace. Anne is the patron saint of women in labor and strangely, miners. Her colors are red and green, which can be found on the wooden St. Anne's Hill signs around the neighborhood.

She is especially popular amoung the French and French-speaking Quebec, according to one website, which states:

The French believed that Mary Magdalene, Lazarus, Martha, and other friends of Jesus crossed the Mediterranean Sea and landed at the southern French city of Marseilles.... According to this tradition Mary Magdalene's group brought with them the remains of Saint Ann.

According to the legend, the bishop, St Auspice, buried the body of St Ann in a cave under the church of St Mary in Apt. When barbarians invaded that area, the cave was filled with debris, almost to be forgotten until it was dug out by miners 600 years later during the reign of Charlemagne.

For the faithful, no tribute is complete without a trip to Scranton, PA to visit the Shrine of St. Ann. It is said to draw thousands of pilgrims every year. Of course, today Scranton is better know as the fictional home of television's "The Office" and Dunder-Miflin.

There are a number of other Ohio instutitions named for Anne, including St. Anne Mercy Hospital in Toledo, St. Anne Epsicopal Church in West Chester, and St. Ann Catholic School in Hamilton.

The Feast of St. Anne is July 26, which should perhaps be a day of celebration in St. Anne's Hill!

In case you hadn't heard, the SAH email tree has migrated to GoogleGroups. There has been a lot of good discussion lately. If you'd like to join our online crew, here's the info from Bobbie, who set us up:

Google has deemed our group appropriate and approved our SAH email
list. What this means is that each and every email you send to st-annes-hill-historic-district@googlegroups.com will go out to everyone on the email list WITHOUT moderation. So be careful of what you say and how it is worded. Please think about your post a little and re-read it for spelling and grammatical errors before hitting that "SEND" key as once it goes you cannot pull it back. Do not send your
emails to news@stanneshill.org as I will be closing that one out and using it only for tours and SAH business correspondence. The NEW EMAIL LIST ADDRESS is: st-annes-hill-historic-district@googlegroups.com.

If you still want to be able to read all the email discussions but do not want to
receive all of the emails, you can adjust your profile as such by going to the
sign in page https://www.google.com/groups/signin?cd=US&hl=en&ssip=g3&_done=http%3A%2F%2Fgroups.google.com%2Fgroup%2Fst-annes-hill-historic-district%2Ftopics

You can then click the line item you wish to handle all the incoming emails. If you want to be able to read all the emails/discussions but don't want to receive them,
click "No Email." As long as you have a Google Account you will be able to
sign into the group and view the discussions at your leisure.

Storm of the Century

It certainly seemed like the Storm of the Century on St. Anne's Hill. As most know by now, a severe windstorm blew through the Dayton Region as a result of Hurricane Ike. Winds reportedly reached upwards of 65 miles per hour. Many trees and branches were sent tumbling to the ground.

SAH lost power around 3 p.m. on Sunday afternoon. Some residents had service restored around 8 p.m. but others had to wait until 6 p.m. on Monday. Other parts of the Dayton Region are still waiting for power to be restored, which may not happen until next weekend according to Dayton Power & Light's ironically named website, WayToGo.com - seriously, that's what it's called.

As our new Sheriff warned of looters throughout the County, several break-ins were reported in the neighborhood over the weekend. Meanwhile, the City of Dayton, Montgomery County, and the State of Ohio all declared a State of Emergency. Neighbors are urged to follow safety precautions and look out for one another. Always report any suspicous activity to 333-COPS.

-
Thanks to all who attended the meeting last night. We had a great turnout to hear Deputy Julie from the County Sheriff's office talk about the Montgomery County sex offender programs.

The most interesting thing I learned was that there are over 1,000 sex offenders but only 5 not accounted for in Montgomery County (and 2 of them are believed to have left the State). Other Ohio counties have hundreds of people they can't find. Kudos to Montgomery County for making sure we know where all these offenders live.

Speaking of the County, the Montgomery County Auditor will be sending out a mailing to let property owners know the results of the tri-ennial property tax appraisal process. We should get them later this week. After that, you have the opportunity to appeal. This number will determine your property taxes for the next three years. The Auditor reported that residential rates are only going up 0.5% county-wide, compared to 11 or 12% in past years.

Finally in City news, the Bomberger Teen Center will be celebrating the grand opening of the "Snack Attack Kafe" on Monday, September 8 at 5:30 p.m. at 1306 E. Fifth Street in Dayton. According to their announcement, they are "a new business venture for the City-Wide Teen Council" and they will be "serving light and healthy snacks." It is not yet clear if it is only for teens, or if it is open to the general public as well. Operating hours are also unknown, but presumably they will close early since the Kafe will be operated by teens.

Got news that impacts our neighborhood? Post it here!

Ps. Don't forget to sign up for the 1st Annual Neighborhood Conference!
-
Posted by Keith at 2:56 PM No comments: