You must look at these links! The amount of research this person did is staggering. Our president has contacted him and hopefully he will grant us an audience at one of our general membership meetings.

We will let you know. Meanwhile, enjoy the links.
Posted by BobbieP at 12:34 PM No comments:

Hello everyone,From today's DDN, here are pictures of the "topping-off" ceremony at Stivers, celebrating the highest point of construction:http://www.daytondailynews.com/p/content/gen/sharedoh/photos_galleries/news/local/013107stivers.html- Keith
Posted by BobbieP at 9:23 AM No comments:

SAM AND I ARE LOOKING FOR A GOOD TENANT. 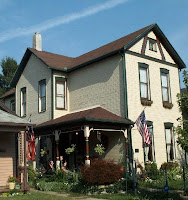 If you have been invited to post to the St. Anne's Blog on the Hill, you can post anything you want (but keep it clean, folks). Announcements, thoughts, opinions...even pictures. Here is a pic of my house >>>>>>>>>>>>>>>>>>>>>>>>>
You can use different fonts and text colors as well. You can edit your post after publishing it or even delete it if you decide you don't like what you said.
Play with it and remember, what you post is a reflection of St. Anne's Hill.
Posted by BobbieP at 8:24 AM No comments:

Dayton City Manager Rashad Young announced changes he plans to make to the City of Dayton's organizational structure to reflect a greater emphasis on stimulating economic development and enhancing service delivery. The reorganization, which includes the realignment of some departments and the creation of some new functions, must be formally adopted by the City Commission before taking effect."To be successful in today's competitive and fast-changing environment, City government must maximize its strengths and capitalize on opportunities," Young said. "The reorganization plan I am putting forth will help accomplish these goals by refocusing the organization on priority initiatives while encouraging greater interaction among and between departments to get the job done." The reorganization represents essentially a cost-neutral change, with the addition of new functions offset by streamlining others. At the executive level, a third Assistant City Manager position will be created to focus on strategic economic development issues. The creation of the new position, to be called Assistant City Manager for Strategic Development, responds to a loud and clear message from the City Commission and the community that strategic economic development is a vital component of the city of Dayton's long-term success.

In addition, to being responsible for the traditional functions of the economic development office, this new Assistant City Manager position will also maintain tangential reporting relationships with personnel in other departments that impact economic development activities, like Building Inspection, Water, and Aviation."This position will be very important to strengthening the city's tax base and maintaining Dayton as a thriving core of the region," Young said. "Among the key goals of the new Strategic Development area will be supporting and promoting existing businesses; assisting and nurturing the development of entrepreneurial upstarts; working with our partners to attract new businesses and promote workforce development; marketing the city of Dayton as the business location of choice; and implementing new strategic development initiatives for the City."
Posted by BobbieP at 3:20 PM No comments:

DPS to top off Stivers