There is exciting work in progress at the former American Saloon at 1600 E. Fifth Street!   The property was recently purchased by "The 1600 Group, LLC" - a group of concerned neighbors that got together to save the building. 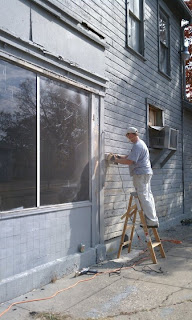 Here's some history from one of the managing partners, Joe:


James Sinkey bought the lot on land contract from the lawyer that platted the area, Thomas Smith, in the late 1840’s. He paid off the land contract in the late 1850’s. The building was built in 1860 as a residence and grocery store. He sold it to Mary Gerber in 1870. She leased it to John Rock in 1891 still as a grocery store and residence for $18 per month. My mother (age 91) tells me that she remembers it as JoJo’s Café when she was growing up. JoJo’s was well known for their hot pork sandwiches. It was still JoJo’s when the [prior] owner purchased it in 1997 for $91,400.

Sometime after 1997, the building was re-named the American Saloon and survived as a ramshackle blue-collar bar until it closed in 2008. It was tied up in legal disputes between the building owner and the bar business for nearly two years.  It is now being restored to help attract a new business to the neighborhood.

The building is an outstanding example of vernacular storefront architecture in St. Anne's Hill.   Check back here for more information on this exciting project!

News from the Liederkranz in St. Anne's Hill:


The Bierfest will include free snacks and door prizes. Food, including the famous Liederkranz brats, a variety of beers, and other drinks will be available for purchase.


Preregister for a Discount


Price at the door $18
Admission for Designated Driver is FREE!
http://www.daytongermanclub.org/

Here's the lastest from the Missing Peace Gallery in St. Anne's Hill:


Please join us this Friday, Nov. 12th 5-8pm, for the opening reception of Graphic Guts.

Missing Peace Art Space is pleased to announce "Graphic Guts", an exhibition of internationally renowned artist and designer Luba Lukova. The exhibition will present a comprehensive collection of Lukova's political posters, including an installation with her critically acclaimed Social Justice series, as well as unpublished drawings and sketches. Luba will be here this Friday for the opening of this great exhibition. The 2010 War Resistors League Calendar was edited by Luba and contained several of her posters.

Missing Peace Art Space is a non-profit art gallery providing an artistic forum for exploring issues of peace and conflict in a tolerant, non-commercial environment. A program of the Unitarian Fellowship of World Peace, a 501c3 nonprofit organization.


Member of the International Network of Museums for Peace