In the spirit of a festival, the Community Matinee is a special concert featuring DCDC's world- Renowned dancers in a perfomance that is ideal for the entire family, from toddlers to seniors. Tickets are subsidized through the community sponsors, making them up to 50% cheaper than tickets to other DCDC concerts.

The Community Matinee has pre- concert games and other fun activities for the youth who attend. This unique performance is more than just a come-and-see event. At one point during the concert audiance members are invited to come onstage and dance with the dancers!

In honor of our 200th post on this blog, here is a little slice of local history!

McClure Street is an important part of the fabric of St. Anne's Hill.    The McClure Street bridge, on the south end of the neighborhood represents one of the major gateways into the community, leading to the Twin Towers area and Ruskin Elementary School.    There are many interesting homes along McClure, which leads north to the Fifth Street corridor.

But where does the name come from?  Who was McClure in Dayton's history?  Luckily, there are some great sources of information that help us answer that question.    This is from http://www.daytonhistorybooks.com/page/page/3423054.htm ....

In 1807 the Dayton Academy was incorporated by the legislature. The corporators were James Welsh, Daniel C. Cooper, William McClure, George F. Tennery, John Folkerth, and James Hamer. William M. Smith was the first teacher. In 1808 a brick school house was built by subscription on the west side of St. Clair, near Third Street. During the winter of 1807 and 1808 a debating club was formed. Its meetings and also spelling matches, which were very popular entertainments, were held in the school house for several winters.

For more about Cooper and Dayton's earliest days, check out the City's website, which has some interesting information.

WILLIAM M'CLURE and George Smith printed the first issue" of The Dayton Repertory on September 23, 1808, to judge from the date of Vol. 1, No.2, which appeared on Friday, September 30. The office address was given as "Main Street".
The Dayton Repertory was a small four-page sheet, 70 by 120 inches in size, with two columns to the page. From a publication statement on the last page of the second issue, we learn that it "Is printed weekly, at two dollars, paid in advance, or two dollars and fifty cents, paid at the end of the year.


As to news, the greater part of the issue was devoted to reprinted dispatches from Spain, England, and France. Almost no local news, which would be of the greatest interest to us, was published. The pioneer editor evidently assumed that the residents knew what was going on locally.
In the fifth issue, which was dated October 21, 1808, the printers made the following announcement: ''The office of the Repertory is removed to the south side of second street, between Main & Jefferson streets - in consequence of which the publication of the paper will be suspended for a few weeks."
During the suspension, Smith sold his interest in the enterprise to Henry Disbrow. The newspaper reappeared on February I, 1809, the definite article being dropped from the title which now read. Dayton Repertory and was embellished by flourishes. This was Vol. I, No. 6. The publication had been materially enlarged to a four­-column, four-page paper, measuring 83/4 by I8 1/4 inches in page size.
In the issue of April 12, 1809, was announced the death of William M'Clure, sen., of Montgomery County, apparently the father of one of the co-publishers of the Repertory. In the issue of June 7 of the same year, we learn that William M'Clure, the printer, was a trustee of Miami University.
The issue of December, 1809, is the last known copy of The Dayton Repertory.

So, thanks to his work we now enjoy the street that bears his name.  This is just one small part of the fascinating history of Dayton and St. Anne's Hill.
Do you have any questions, or an idea for a blog topic?  Let us know, and help keep this blog going for another 200 posts!   Write to us at news[at]stanneshill.org today.
-
Posted by Keith at 12:28 AM No comments:

From the Dayton Daily News ....

DAYTON — The Dayton Society of Painters and Sculptors is showing off its new members.  Twenty-one of them are presenting their works at the High Street Gallery. There are 44 works total, divided between the rooms on the first floor....  New members also showing photographs in the show are: Amanda Baker, Frances Schanberger and Sally Struthers....

“The wide variety of expression speaks to the healthy art community in the Dayton region, and to the expansive talents of the new membership of the Dayton Society of Painters and Sculptors,” [Bridgette] Bogle said.

We could not have said it any better ourselves!
Come check out the arts scene in St. Anne's Hill. 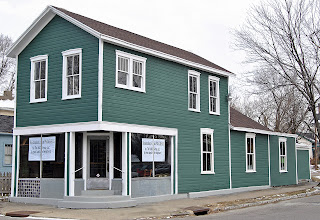 DAYTON - For one group of dedicated neighbors, an exciting project has led to national recognition. PRESERVATION magazine has featured the former JoJo's Cafe in their March 2011 issue, highlighting an effort that has been two years in the making. The property is located at 1600 E. Fifth Street in Dayton's St. Anne's Hill Historic District.

PRESERVATION is the award-winning magazine of the National Trust for Historic Preservation, the organization that works to revitalize communities and save historic places. The magazine offers lively writing by the nation's best journalists on controversies, trends, accomplishments, and events of importance to cities, towns, suburbs, and rural communities.

The building at 1600 E. Fifth Street was constructed around 1860 by James Sinkey, who operated a grocery store on the 1st floor and lived with his wife Mary in the two rooms on the 2nd floor. It housed a variety of retail uses until the 1930s when it became JoJo’s Café. The Cafe was well-known in Dayton for decades because of its pulled pork sandwiches. After JoJo's closed, the business changed names in the mid 1990s and continued as a neighborhood bar known as the American Saloon until closing in 2008.

This project came about because 29 concerned neighbors came together to purchase and renovate the vacant property. The process started in 2008 with an idea hatched by Brian Young, a resident of St. Anne’s Hill for several years. He thought that this property could be transformed into a neighborhood gathering spot. He called on Joe Dierkers, a long time Dayton commercial Real Estate Broker who had recently purchased a home in the area, to help with the acquisition process. They developed a plan, and with the support of their neighbors, formed a company called The 1600 Group, LLC.

Legal problems, title problems and on-again off-again negotiations caused many delays. Finally, the purchase was completed on October 22, 2010. The exterior work (with a few minor exceptions) was completed on December 7th, only 46 days later. The interior restoration is currently underway.

The 1600 Group is now seeking a business or investor to help bring the property back to a productive use for the benefit of the community. They want to ensure that the business that will be a positive force in the community. and help continue the revitalization
of the historic Fifth Street corridor. The St. Anne's Hill Historic Society is supporting the plan.

Dayton-based photographer Nicole Klein provided the photographs to the magazine.

The neighborhood of St. Anne's Hill is a historic community located one mile east of downtown Dayton, just beyond the historic Oregon Arts District. The area was part of the original out-lots of the city of Dayton, which were plotted in 1815 by Daniel C. Cooper, an early settler of the city. By the 1830's, the first documented use of the name "St. Anne's Hill" appeared in newspaper advertisements promoting the sale of nursery stock from a local greenhouse.

Here are two new art shows on Fifth Street in St. Anne's Hill... check it out!

And over at Stivers School for the Arts....


Falling Up: Behind the Scenes Fifth Street Gallery
Stivers School for the Arts

The installation is a closer look at the behind the scenes aspects of Djuna Wahlrab’s animated short Falling Up ......a short, animated film about the rituals of childhood.  In the Fifth Street Gallery, people will have the opportunity to get an upclose look at the sets, building facades, and concept art; as well as some of the props that were used in the film.   Price: Free   (Note: Runs until March 25, 2011)

Just another example of the great things happening in our community.   To learn more, just visit us at http://www.stanneshill.org/ or stop by our monthly meeting tonight!  We meet the first Tuesday of every month in the Liederkranz building at Fifth and High Streets.