Join us September 10 and 11, 2011 for the first ever "Work in Progress" Restoration Tour in St. Anne's Hill Historic District in Dayton! This self-guided tour, open from noon to 4 pm, will feature ten properties that have been recently restored or are a true work in progress.

[Updated] Start your tour at the former American Saloon at 1600 E. Fifth Street, and pick up your map there.  Tickets are only available at the door.   There are no advanced ticket sales for this event.

Come see what historic preservation is really like, and hear what the property owners have to say about it. Visitors can also check out our neighborhood art galleries and enjoy a meal at the New York Pizzeria.

All proceeds will be dedicated to the Fifth Street improvement project. Donations are welcome. For more information, check back here soon or join our Facebook page.

More details will be added as we get closer to the event. Please help spread the word!

[Update] Every ticket purchase comes with a coupon for a free treat from Boulevard Haus restaurant in the historic Oregon District while supplies last - so your ticket nearly pays for itself! Experience history right here in Dayton, Ohio.


For more information on this project, please contact us at news[at]stanneshill.org.

Many visitors to our biennial "Dickens of a Christmas" Tour have heard mention of the Muth Brothers, who lived at 101 La Belle Street in St. Anne's Hill.   But what do we really know about them?   Well, a few things...

The Muth Brothers built the home in the Queen Anne style of architecture around 1905, according to Preservation Dayton.  This Wikipedia entry describes the American Queen Anne style as  "picturesque buildings with "free Renaissance" (non-Gothic Revival) details... of the period 1880 to 1910."   The porch, gables, and wrought-iron fence are typical of this period - and the homes in St. Anne's Hill. 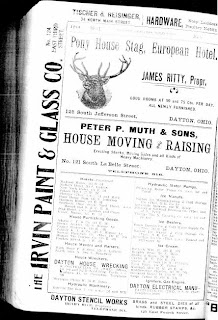 We also know that they owned a rigging company, as seen in this advertisement from an old Dayton City Directory, which was like the yellow pages of their day, and can be found at the Dayton Metro Library.

Of course, it was never quite clear exactly where they conducted their business, because the house is actually one of three homes built side-by-side with no real yard space between them.    For the lucky homeowners who enjoy beautiful Victorian details but would prefer to avoid yard work, this is an ideal situation.    However, that does not answer our question - where did they do business?


Well, if we look at the historic Sanborn Insurance Map from 1918, which is also available from the Library, we can see that there was actually a warehouse on La Belle Street at one time - just a few doors down from their home.    In fact, this was probably typical of the era.   Many businesses were operated from people's homes or in their own neighborhood.    Before cars, interstates, and suburban sprawl became the norm it made perfect sense to live and work in the same community. (click on the picture to expand the image) 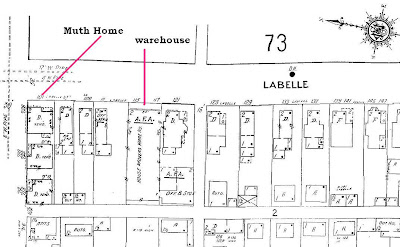 In writing this story, we discovered one more bit of information that was lost in history until recently.   Our friends at DaytonHistoryBooks.com uncovered this gem of a story, which is edited for brevity here....

The sudden attack upon Pearl Harbor, December 7, 1941, found not only our government unprepared for war, but also found the manufacturers of public warning apparatus unprepared for the unprecedented demand for their products.
Sirens, air driven and electrically operated, have long been used by small communities as fire alarms.  These communities generally cover a small area and an adequate coverage was obtained by use of these sirens.  The densely populated cities, however, were unable economically to provide a sufficient number of them to get adequate coverage in their unheard of use as air raid warnings....
This City, classified as a highly strategic one, set to the task of installing warning signals immediately following the Pearl Harbor attack by installing six five-horse-power, four two-horse-power, and fourteen one-half horse power sirens.  The latter were placed at selected points in the noisy sections in the downtown business area.  [Editor's note: Dayton at that time was already an important military asset because of the airplane industry built by the Wright Brothers, and what is now known as Wright-Patterson Air Force Base.}
Eventually all sirens were ready for operation and a test was planned.  This plan consisted of the placement of 502 civilian defense lieutenants at their posts throughout the City.  Each was to turn in a report as to the dependable audibility of the signal at this particular post.  The results of the tests were very disappointing since less than forty per cent of the reports indicated that the signal was satisfactory.
We were rewarded for our patient waiting by a demonstration of this new equipment, called the “Victory Siren,” in September, 1942.  This siren was a mobile one and was spotted at Deeds Park in order that the truck upon which it was mounted might be turned in a 360 degree movement, thus giving coverage in a complete circle.
It was not until early in the spring of 1943 that we were able to see our way clear for purchase of four of this type siren which were then ordered from the Chrysler Motor Corporation of Detroit, Michigan.
The actual mounting of the heavy sirens was performed by Muth Brothers, riggers, who cooperated with the Council for Defense in this work.
The task of erecting the towers and mounting the sirens was not a small one.  Our efforts, however, were rewarded by the satisfactory tests that were made for overall coverage.  We feel that if the need ever came for their use in an actual air raid that the Council for Defense and its volunteer workers will be adequately alarmed


So it turns out that St. Anne's Hill played a small part in our national defense because of a little company that started on La Belle Street.   Come learn more about Dayton's History at our next Holiday Tour!