I had always heard that nobody knew exactly where the name "St Anne's Hill" had come from. The story goes that it appeared in local advertisements for a greenhouse nursery in the area, sometime around the turn of the century. The name stuck, and our neighborhood has been known at St. Anne's Hill ever since. So that was always the story. That is, until now...


During the "Dickens of a Christmas" home tour, I heard a different story. According to our neighbor (and friend) Fred, there was another rumor for the origins of the name. He had heard there was a maternity ward for unwed mothers at the old St. Elizabeth Hospital. It is established fact that the hospital existed for many decades until it closed a few years ago. Today, it is a thriving multi-tenant medical center.


Anyway, during the Great Dayton Flood of 1913 much of downtown Dayton was underwater. Back then, much like today, the area was a bustling mix of homes and small businesses, including a little company now known as NCR. As floodwaters rose, many residents of Dayton fled to higher ground for refuge. For some, that refuge was found in a neighborhood on a hill, just to the east of the center city.


So what then, of the hospital and the maternity ward? Well, it was located at the river's edge to the west of downtown. Fred went on to say that the young orphans and unwed mothers were supposedly carried up the hill in east Dayton to escape the flood.

The name of that maternity ward? Yup, it was "St. Ann's" and now, for the first time, here is the proof: 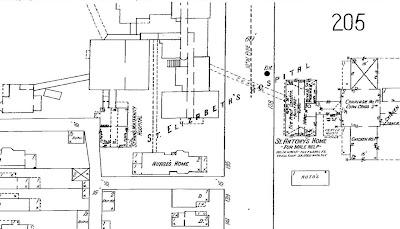 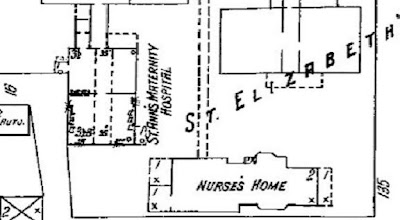 This is from the 1919 Sanborn Insurance Maps of Dayton, available from DaytonMetroLibrary.org and considered one of the best sources for historical data.


So could it be that our neighborhood was named for the fortunate orphans and mothers of St. Ann's maternity ward who were rescued from the flood? Were there generous neighbors who took the children into their homes? Perhaps the greenhouse took it's name from this tale of heroism?

Does this solve the mystery? I guess we'll never know for sure.


UPDATE: I guess I was wrong about that theory! An alert reader sent me an email saying:

There is a reference to "St. Anne's Hill" in The History of Montgomery County Ohio, published by W.H. Beers & Co. in 1882. Under a heading called "Village Plats and Other Localities," on page 595, this book says:

The word "was" implies to me that by 1882 "St. Anne's Hill" was a name that had been used in the past and had dropped out of common usage. This would also mean by the time of the 1913 Dayton Flood, the name "St. Anne's Hill" had once been used and was long forgotten.

Do you have any old stories about the neighborhood? Let us know!